This short list of fun urban fantasy books and series blurs the lines a bit between a strict definition of urban fantasy and say - paranormal or supernatural fantasy. But what I think is most important when putting a list like this together is the quality of the books that make the cut.
6 Comments

When it comes to fiction I’m an enormous fan of just about anything magic related. I grew up reading a lot of high fantasy which typically takes place in a time period associated with the past, if not always our own world’s past. And like many lovers of fantasy I’ve often imagined how cool it would be if magic were around today – in the real world.

Unfortunately, that will never happen; life-spoiler: magic isn’t real. But urban fantasy is real and it explores the notion of epic fantasy style magic (and more) running wild in modern times. How cool is that!?

This short list of fun urban fantasy books and series blurs the lines a bit between a strict definition of urban fantasy and say – paranormal or supernatural fantasy. But what I think is most important when putting a list like this together is the quality of the books that make the cut.

I haven’t read all of the books in each of these series (not all of them are finished either) but enough to know that if you pick them up and get started, chances are you’re going to have a good time. So long as you are into urban fantasy. And if you’re not, why have you read this far?

Richard Mayhew is a young man with a good heart and an ordinary life, which is changed forever when he stops to help a girl he finds bleeding on a London sidewalk. His small act of kindness propels him into a world he never dreamed existed. There are people who fall through the cracks, and Richard has become one of them. And he must learn to survive in this city of shadows and darkness, monsters and saints, murderers and angels, if he is ever to return to the London that he knew.

For Harry Dresden, Chicago’s only professional wizard, business, to put it mildly, stinks. So when the police bring him in to consult on a grisly double murder committed with black magic, Harry’s seeing dollar signs. But where there’s black magic, there’s a black mage behind it. And now that mage knows Harry’s name.

Like everyone else, precocious high school senior Quentin Coldwater assumes that magic isn’t real, until he finds himself admitted to a very secretive and exclusive college of magic in upstate New York. There he indulges in joys of college-friendship, love, sex, and booze- and receives a rigorous education in modern sorcery. But magic doesn’t bring the happiness and adventure Quentin thought it would. After graduation, he and his friends stumble upon a secret that sets them on a remarkable journey that may just fulfill Quentin’s yearning. But their journey turns out to be darker and more dangerous than they’d imagined. Psychologically piercing and dazzlingly inventive, The Magicians, the prequel to the New York Times bestselling book The Magician King, is an enthralling coming-of-age tale about magic practiced in the real world-where good and evil aren’t black and white, and power comes at a terrible price.

Felix Castor is a freelance exorcist, and London is his stamping ground. It may seem like a good ghostbuster can charge what he likes and enjoy a hell of a lifestyle–but there’s a risk: Sooner or later he’s going to take on a spirit that’s too strong for him. While trying to back out of this ill-conceived career, Castor accepts a seemingly simple ghost-hunting case at a museum in the shadowy heart of London–just to pay the bills, you understand. But what should have been a perfectly straightforward exorcism is rapidly turning into the Who Can Kill Castor First Show, with demons and ghosts all keen to claim the big prize. That’s OK: Castor knows how to deal with the dead. It’s the living who piss him off…

Atticus O’Sullivan, last of the Druids, lives peacefully in Arizona, running an occult bookshop and shape-shifting in his spare time to hunt with his Irish wolfhound. His neighbors and customers think that this handsome, tattooed Irish dude is about twenty-one years old—when in actuality, he’s twenty-one centuries old. Not to mention: He draws his power from the earth, possesses a sharp wit, and wields an even sharper magical sword known as Fragarach, the Answerer.

Unfortunately, a very angry Celtic god wants that sword, and he’s hounded Atticus for centuries. Now the determined deity has tracked him down, and Atticus will need all his power—plus the help of a seductive goddess of death, his vampire and werewolf team of attorneys, a sexy bartender possessed by a Hindu witch, and some good old-fashioned luck of the Irish—to kick some Celtic arse and deliver himself from evil.

Probationary Constable Peter Grant dreams of being a detective in London’s Metropolitan Police. Too bad his superior plans to assign him to the Case Progression Unit, where the biggest threat he’ll face is a paper cut. But Peter’s prospects change in the aftermath of a puzzling murder, when he gains exclusive information from an eyewitness who happens to be a ghost. Peter’s ability to speak with the lingering dead brings him to the attention of Detective Chief Inspector Thomas Nightingale, who investigates crimes involving magic and other manifestations of the uncanny. Now, as a wave of brutal and bizarre murders engulfs the city, Peter is plunged into a world where gods and goddesses mingle with mortals and a long-dead evil is making a comeback on a rising tide of magic.

When fifteen-year-old Clary Fray heads out to the Pandemonium Club in New York City, she hardly expects to witness a murder—much less a murder committed by three teenagers covered with strange tattoos and brandishing bizarre weapons. Then the body disappears into thin air. It’s hard to call the police when the murderers are invisible to everyone else and when there is nothing—not even a smear of blood—to show that a boy has died. Or was he a boy?

This is Clary’s first meeting with the Shadowhunters, warriors dedicated to ridding the earth of demons. It’s also her first encounter with Jace, a Shadowhunter who looks a little like an angel and acts a lot like a jerk.

Within twenty-four hours Clary is pulled into Jace’s world with a vengeance, when her mother disappears and Clary herself is attacked by a demon. But why would demons be interested in ordinary mundanes like Clary and her mother? And how did Clary suddenly get the Sight? The Shadowhunters would like to know. . . .

Exotic and gritty, exhilarating and utterly gripping, Cassandra Clare’s ferociously entertaining fantasy takes readers on a wild ride that they will never want to end.

Preternatural Private Investigator and Paranormal Huntress Kassandra Lyall is used to working alone. Whenever there’s a murder or a mystery to solve that involves the preternatural – she’s the witch they call. When she’s called in to help the local cops work on a mysterious murder case, she finds herself needing all the help she can get. A bloodthirsty werewolf is loose in the city and on a killing spree.

As if her plate weren’t full enough, a strange she-wolf seeks Kassandra’s aid, asking her to help find her missing brother. Kassandra soon learns that the strange she-wolf serves two masters, and one of those masters has taken quite an interest in her.

In a world where vampires have charmed their way into modern society, where werewolves walk the streets with their beasts disguised by human skin, Kassandra Lyall has a secret of her own to protect.

She’s one of them.

Since it was first published, American Gods became an instant classic. Now discover the mystery and magic of American Gods in this tenth anniversary edition. Newly updated and expanded with the author’s preferred text, this commemorative volume is a true celebration of a modern masterpiece by the one, the only, Neil Gaiman.

Locked behind bars for three years, Shadow did his time, quietly waiting for the magic day when he could return to Eagle Point, Indiana. A man no longer scared of what tomorrow might bring, all he wanted was to be with Laura, the wife he deeply loved, and start a new life.

But just days before his release, Laura and Shadow’s best friend are killed in an accident. With his life in pieces and nothing to keep him tethered, Shadow accepts a job from a beguiling stranger he meets on the way home, an enigmatic man who calls himself Mr. Wednesday. A trickster and a rogue, Wednesday seems to know more about Shadow than Shadow does himself.

Life as Wednesday’s bodyguard, driver, and errand boy is far more interesting and dangerous than Shadow ever imagined—it is a job that takes him on a dark and strange road trip and introduces him to a host of eccentric characters whose fates are mysteriously intertwined with his own.

What Did I Miss?

Urban fantasy is a hugely popular sub-genre and I know I’ve only scratched the surface with this list. What are some of your favorites in this category? What should have made my list? Let me know in the comments below.

The first novel I read as a child was The Hobbit by J.R.R. Tolkien. Not only was the subject matter magical, but to me, as someone who had trouble learning to read in the first place, the act of reading itself was the most magical part. I’ve been under the spell of literature ever since! That’s why in this category of my blog I share my love of reading with the world. An Introduction to The Wheel of Time

I've been reading The Wheel of Time since the late 1990's and I still can't imagine letting a year go by without reading or listening to the entire fourteen book series at least once. The world Robert Jordan created feels like home to me, the characters old friends.... 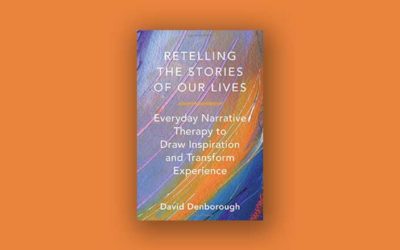 Retelling the Stories of Our Lives: Everyday Narrative Therapy to Draw Inspiration and Transform Experience

Our lives and their pathways are not fixed in stone; instead they are shaped by story. The ways in which we understand and share the stories of our lives therefore make all the difference. If we tell stories that emphasize only desolation, then we become weaker.... Winning the Story Wars: Archetypal Marketing in the Digital Era

I was walking through a Barnes & Noble book store two summers ago when a book in the business section caught my eye. It said "Story Wars" in large letters across the front. That was all I needed to see for my interest to be piqued. As a lover of stories my whole...